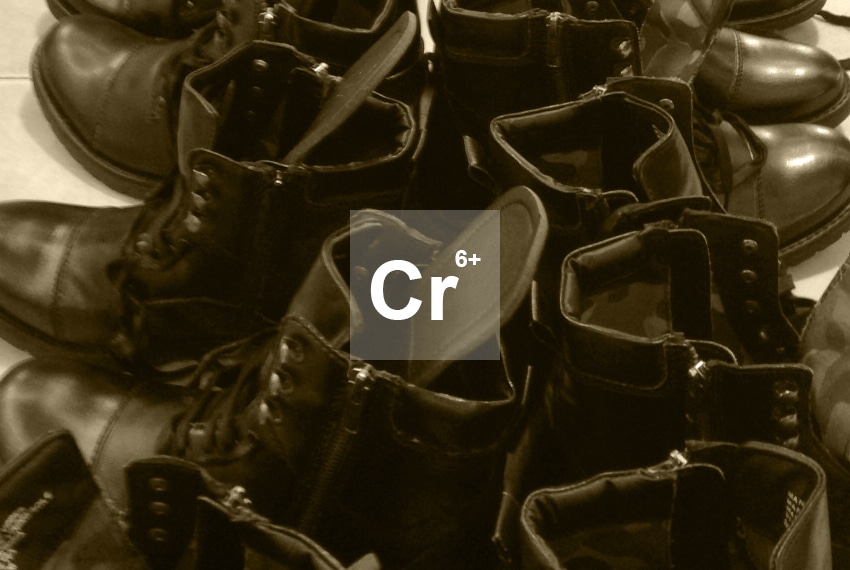 Ever had an allergic reaction to a leather shoe or watch?

NuShoe will reduce Chromium (VI) to Chromium (III). Our solutions can be applied to uncut leather or to finished uppers or shoes. These products not only eliminate any Chromium (VI) which is present in leather but also prevent the future formation.

What is Chromium (VI)?

Chromium is a metallic element found in rocks, soils, plants and animals. It occurs in combination with other elements as chromium salts, some of which are water-soluble. Chromium is found in three forms: Chromium (0), Chromium (III) and Chromium (VI).

Chromium (III) occurs naturally in many fresh vegetables, fruits, meat, grains and yeast. Chromium (III) is an essential nutrient that helps the body use sugar, protein and fat. Chromium (VI) compounds have no taste or odor but are the most poisonous form of Chromium and are classified as carcinogenic.

Where does Chromium (VI) come from in leather?

Chromium (III) tanned leather can form traces of chromium (VI) under certain environmental conditions. The conversion from Chromium (III) to Chromium (VI) is a oxidation process and can be facilitated by the factors like heat, UV radiation, changes in pH, presence of unsaturated organic compounds (e.g. natural fats), oxidizing agents and many other factors. Often several of these factors need to be present at the same time.

How big is the health risk of leathers containing Chromium (VI)?

In some cases, Chromium (VI) has been formed in leather. It is embedded in the collagen leather matrix and not very volatile as such. Although risk of migration of Chromium (VI) to the skin is minimal allergic reactions are possible when leather is in direct contact with naked skin and person is sweating. Under the acid conditions of sweat Chromium (VI) however will be transformed back to the non toxic Chromium (III) and thus would not migrate through the skin. There is no risk of breathing any Chromium (VI) emitted from leather (i.e. leather coats). This is because Chromium (VI) levels in leather as such are far too low but also because volatility of Chromium (VI) from leather into gas phase basically does not exist.

Chrome tanned leather has a history of over 100 years and if manufactured according to high quality standards do not pose any higher health risk than any non leather materials.