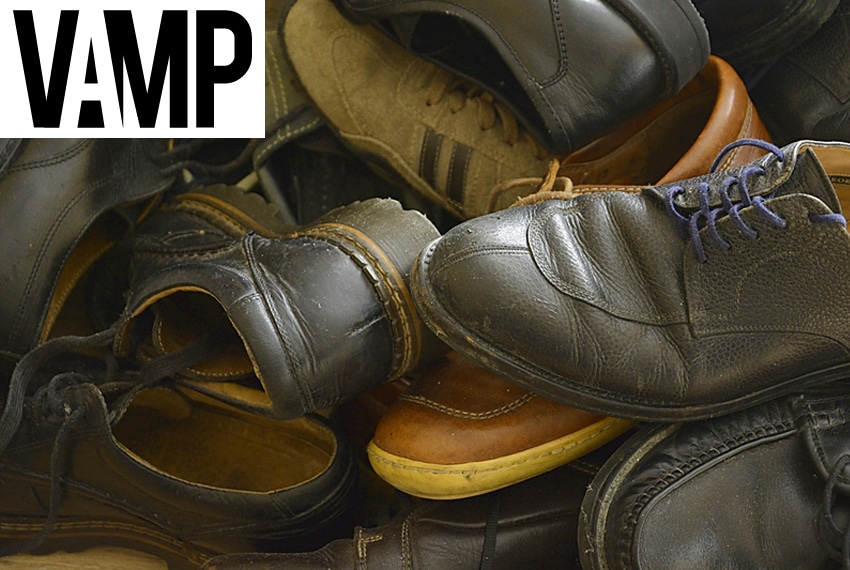 A total of 35,000 pairs of shoes were packed into the wrong boxes. The date is June 23. By July 13, every last pair of these shoes will be repackaged—by hand.

When it comes to fixing blunders like this, those in the footwear industry all have the same number in their contacts list—NuShoe. The San Diego-based company owns the world’s largest shoe repair factory, fixing issues with defective or damaged stock before it hits store shelves—or the landfill.

If NuShoe doesn’t sound familiar, that’s partially intentional. NuShoe’s clients include well-known national and international brands who want defective stock dealt with out of sight. Discretion is the name of the game.

Aside from dealing with problem stock, NuShoe handles inventory grading and sorting. Brands that offer repair services to their customers also do all of this through NuShoe.

But it’s not all backroom secrecy. Founded in 1994, NuShoe was the vision of a fresh-faced, 23-year-old college graduate named Eric Neuner, who bought a San Diego-based chain of cobbler shops and set up a central facility to process shoe repairs, not unlike a laundry operation.

As consumer tastes changed, so too did the shoe repair business. People were wearing sneakers more, traditional, leather-soled shoes less. They were buying more shoes more often as well, which meant people cared less if their old pairs wore down—they would buy a replacement.

“We became much more of a disposable society,” Neuner said. Of the 40,000 shoe repairs in the United States 20 years ago, Neuner estimates less than 4,000 remain today.

“When I started on a Saturday morning we would have a line out the door and around the corner of ladies with bags of heels. That’s all gone now, but even in the shoe repair industry, which is getting smaller, there are still great opportunities.”

Neuner closed the last of his repair shops over 10 years ago, but NuShoe is doing better than ever, having shifted focus to working with brands.

NuShoe currently employs over 100 people, working on projects that range in size from 10,000 shoes into the hundreds of thousands. According to James Musial, NuShoe director of business development, the biggest issue is mold, which affected “hundreds of thousands of pairs last year.”

Kept in improper conditions, shoes are a magnet for mold. Simply being stored in a room that is too humid, or being transported in a container that has a hole in it, can trigger an outbreak of spores.

“It’s been rampant, we’ve really seen [mold] raise its head over the last couple years,” said Musial, who for many years worked as Wolverine’s quality director. “I’ve been working on a mold prevention program with several brands. It really comes down to keeping things clean and dry.”

As footwear manufacturing has moved almost entirely overseas in the last two decades, Musial says issues with mold are on the rise, especially in hot and humid Asian countries like India, China and Vietnam.

For footwear companies, a moldy shipment can have dire consequences. NuShoe not only saves the shoes, but has often prevented brands from losing accounts worth millions of dollars.

“I’ve heard people say, ‘If we don’t get the shoes out in the next three weeks we’re going to lose the quarter,’” Neuner said. “These days your factories are thousands and thousands of miles away, and months away from something being produced and getting to you, so basically we allow brands to have a sort of mini-factory in the U.S.”

Mold isn’t the only common issue though. The factory also works collaboratively with brands to come up with solutions for defective product. “Recently a sandal brand came out with new sandals with straps, but found it needed some sort of Velcro, so we sourced with the factory and they cut and produced the Velcro and shipped it all to us. That was 20,000 pairs.”

Still, despite the size of these numbers, Musial says the mistakes represent only a fraction of the total number of shoes the footwear industry produces, and that companies generally do a good job of preventing issues.

“[The footwear industry] has broadened the base of its supply chain so that you’re not just sourcing locally, but from all over the world,” he explained.

“Despite how large the industry’s supply chain is though, it’s amazing how few mistakes make it through to NuShoe. Some big brands who make 10 million pairs—only 10,000 may be defective.” 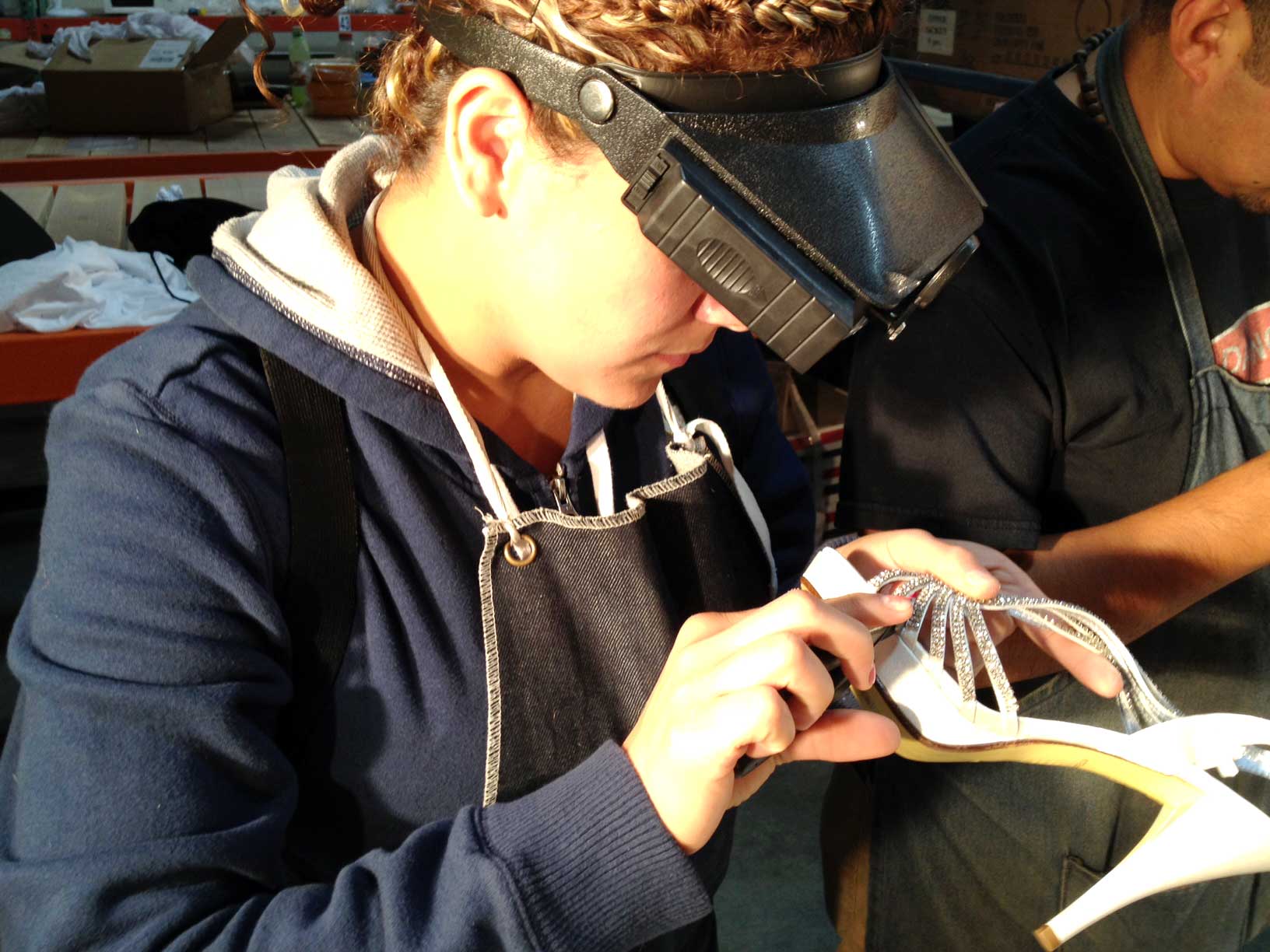 Aside from working directly with brands, in recent years NuShoe has “dramatically” increased its client base with factories, developing a presence and awareness among the Asian factories in particular. “They know who we are now and they know they can call us if things go wrong,” said Musial, who spearheads the efforts to get more factories on board.

As sustainability continues to become an industry-wide trend, NuShoe is in part positioning itself as a green company, helping to prevent B-grade shoes—shoes that don’t meet brand’s standards of quality—from ending up in landfills.

“I’ve seen firsthand in shoe factories that brands don’t know what to do with them. No one wants to buy them because they’re old styles, so to close that sustainability gap is something I’m really excited about,” said Musial.

“We don’t believe in filling trash dumps with shoes, we believe in giving them to people who need them,” Neuner added. “We want to maximize value to the brand, through return to stock or in helping them find the most socially and fiscally responsible route possible.”

Aside from growing donations, NuShoe is also starting to receive requests for handbags and other accessories. Neuner said he sees apparel and handbags as natural “next steps” in terms of growing the business.

But NuShoe hasn’t totally forgotten its roots either. The company is still in the consumer repair business, but like everything else, they’ve moved online. For under $100, customers can now mail their worn-out hoofs to NuShoes for repair.

Neuner said his responsibility for his employees is what keeps him passionate about the shoe repair business, “There are families that depend on me waking up every morning and doing what I do.”